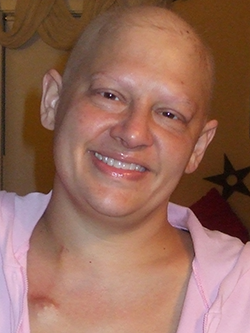 In mid-September 2011, I went to my Nurse Practitioner for an annual exam.  During the breast exam, she felt a lump in my right breast.  I was unconcerned and reminded her that I had felt that lump seven years prior, had a mammogram and was told that it was nothing.  She, however, was concerned and did not like the way it felt and sent me for a mammogram.  Following the mammogram, I was informed that it would be necessary to perform an ultrasound and biopsy.  Still unconcerned, I asked if we could put it off a week, as I was getting ready to go out of town for work.

The following week, I returned for the ultrasound and biopsy.  The Radiologist said they would call at noon the following day with my results.  The next day, right at noon, the phone rang.  I knew it was the Pathologist and fully expected to be on the phone for 30 seconds while she told me, “It is nothing.”  The conversation ended up being much different than what I was anticipating: “I have the results of your biopsy and it is not good.  It is cancer.”  My heart sank.  While my mother had been diagnosed with breast cancer just two years prior, I was positive that my lump was not cancerous.  I was only 42 and healthy – women my age don’t get breast cancer, right?  Being so sure that it was not cancer made the news hit that much harder.

The next day began a long series of phone calls and appointments, consultations with surgeons, and scheduling an MRI to find any additional masses that did not show up on the mammogram.  Additionally, there was a multitude of reading and research to be done.  The general surgeon had informed me of my options, but now it was up to me to determine which option was going to be best for me.  I read books and reviewed online blogs and websites.  After much thought, I decided to have bilateral mastectomies and reconstruction.  Five days before my surgery, I attended my very first Susan G. Komen Race for the Cure.  I was struck by the number of people who were there – thousands of people whose lives had been touched by breast cancer.  And I was now one of them. 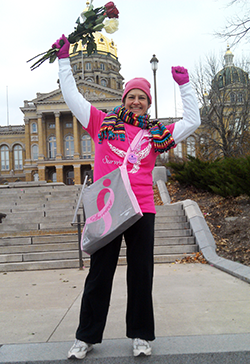 On October 27, 2011, I had my surgery.  It went well and the surgeon was certain they had gotten all the cancer.  Shortly after my surgery, I met with my oncologist.  I knew my cancer was Estrogen positive, so I assumed I would be put on an anti-estrogen medication for the next five years.  I didn’t expect any treatments beyond that, as they had removed all the cancer.  My oncologist had other plans for me. “This is some pretty aggressive stuff, so we are going to be aggressive too,” he said.  And once again, my heart sank.  I went from not expecting any additional treatments to having eight rounds of chemotherapy over 16 weeks, and 52 weeks of Herceptin.   As I sat hearing this, it felt like the rest of my life was going to revolve around trips to the cancer center.  I learned that the 52 weeks of Herceptin treatments was necessary because my cancer was HER2 positive.  I had heard “HER2” mentioned by a nurse or a doctor somewhere along the way, but didn’t know what it meant and certainly didn’t know how it would impact my treatment.  Some weeks after I had begun my treatment, I was reading a magazine and came across an article about cancer.  The article mentioned that in the 1970s, an oncologist was curious why breast cancer patients with the HER2 gene mutation had a high mortality rate.  He began looking for a treatment and, after 20 years of research, Herceptin was approved to treat patients with the HER2 mutation.  It was sobering to think that had I been diagnosed just 13 years earlier, I might not be here today.

I am so thankful for all the people who have been there for me along the way – my boyfriend, my family, my friends, and all of the wonderful, amazing, compassionate medical professionals who helped me fight my battle.

I have participated in the Komen Race for the Cure every year since my diagnosis.  This past year at the Race, I overheard a conversation. “Why all the pink?” one person asked.  “It’s so people are aware of breast cancer,” responded the other. The first person replied, “But everyone knows that there is breast cancer.”  I realized that AWARENESS of breast cancer is really just the tip of the iceberg.  Yes, everyone is AWARE that breast cancer exists, but do they realize the number of people that are impacted by breast cancer?  Do they realize that funding for additional research can lead to new, lifesaving treatments, like the Herceptin that may have saved my life?  Do they realize the education regarding breast cancer can help people to catch it early, improving the survival rate?  These are all things that Komen Race for the Cure helps to support. And, for that, I am so grateful.