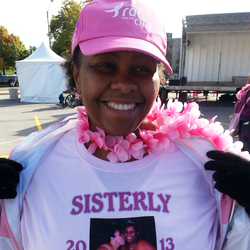 In March of 2012, I felt a lump in my right breast but put off going to the doctors because I didn’t think it was anything more than me putting on some weight.  Two weeks later I finally made an appointment with my family doctor, she felt the lump and referred me to Katzmann Breast Center.  On April 2, 2012, one day after my 47th birthday I had an appointment with Tracy.  She was so nice and after checking me she got the ball rolling.  That same day she had me do a mammogram along with an ultra sound and noticed a change from my mammogram in November 2011.  Tracy scheduled me for a biopsy on Thursday of the same week.  I had to call on Tuesday, April 9th for the results. I was on my break at work when I made the call to find out my results…I will never forget that day.  Once the nurse transferred me to Tracy I knew things weren’t good.  Tracy confirmed that is was cancer and scheduled an appointment with Dr. Beck.

I was diagnosed with Stage II breast cancer.  I met with Dr. Beck and was told what my options were and given a lot of information.  Dr. Beck reassured me that the decision was mine but gave me her recommendation and we decided on a lumpectomy.  On May 7, 2012 I had a lumpectomy followed by 8 chemo treatments and 36 radiation treatments. A year after my surgery I got lymphedema which was very painful and took a lot of treatments with Tammee to get it under control.  I now have to wear a compression glove and sleeve to keep it under control.  By the help of a great medical staff and the Grace of God, I am a 2yr survivor.

Telling my husband and three children was one of the hardest things I ever had to do. I was more worried about how my family would survive without me than me not surviving. I thank my family and friends for all of their care, prayers and love during this difficult time.

Race for the Cure has helped me so much by providing me with information to better understand breast cancer. It has provided me a chance to get to know other survivors and share our stories and to know that I am not alone.  Race for the Cure events have helped me heal by getting involved and feeling like I am contributing to the cause.  Raising money is so important because not everyone has insurance and to know that they can get the medical treatment they need is so important to early detection and healing.

Education is so important for all women because early detection is the key to survival. The more you know about breast cancer symptoms and self-checks the better chance you have at catching it before it’s too late. Knowledge is power!!

Two weeks after I was diagnosed with breast cancer my younger sister was diagnosed also.  My sister only survived 3 months but I made a promise that I would be a survivor and voice for both of us.  This has been the toughest journey I have gone through, but even when I didn’t feel good I tried my best to keep a positive attitude and not dwell on me being sick.  Staying positive and knowing that God was in control helped me to survive breast cancer.

I would like to say a special thank you to Tracy, Tammee, & Dr. Beck at Katzmann Breast Center, Dr. Welker & Dr. Collitier at Mercy Cancer Center along with all of the other staff who made this scary journey a little easier.  Last but not least a big THANK YOU to my husband Greg for taking good care of me.