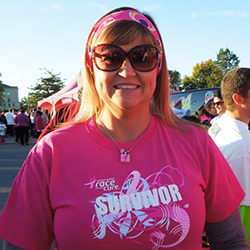 In June of 2011 I discovered a lump in my breast.  I had just had a clean mammogram 2 months prior.  I proceeded to the doctor and had an ultrasound and a biopsy.  2 weeks later I was diagnosed with DCIS, just one week following my 50th birthday. What a 50th birthday present.  There was no history of breast cancer in my family, and I was the most active and healthiest of all my siblings, so discovering I had breast cancer was a shock.  I was told DCIS is curable and treatable so a lumpectomy and radiation were prescribed.  I had a lumpectomy July 5th (and lymph node removed) and then a week after went to my day of doctor appointment (cancer, oncologist and radiologist).

I was told my cancer was estrogen based and when I went to see the radiologist was told there was a slim margin that didn’t look clean and they wanted to do another lumpectomy.  So the end of July I had another one and this time they did the freeze test while I was on the table and I was told they got it all.  I was scheduled to start my radiation the following Monday.  That next Monday they called to tell me that 3 pathologists had reviewed the results from the lumpectomy and all 3 had still found cancer cells.  So once again radiation was not started and I was looking at another lumpectomy.  I went and had an MRI done and it did show suspicious cells from the point of the incision to the edge of the nipple.  So taking all this into account and my not such good luck thus far, I opted for a single mastectomy.  I was going to be down to much breast tissue I would have needed a partial and prosthesis and at this point in time, I just wanted to be done with it, get rid of the cancer and move on. So on September 2nd of that year I had my mastectomy and my tissue expander put in.  I’m not one for things dragging along so doubling up the dose of saline injections I was ready for my implants surgery in November.

Along with my breast cancer, I had been having issues with my hip (on the same side of my body) and had my hip replaced in January of the next year.  Then further surgeries of nipple reconstruction, tweaking…etc and by the end of 2012, I was finally one year cancer free and no more surgeries on my horizon.

Now I am currently a 2 1/2 year cancer survivor.  During this time I had to lean on family and friends in a way I never had to before.  I truly believe that was what God wanted me to learn from this journey, that you don’t have to do things by yourself or be alone.  There are support groups and many people there to help guide you.  Susan G Komen, among others, provided me with the support and tools I needed to face this disease and become stronger through it.  Now I am here to help others and give back to them what others had given to me.  Although I never had to go through Chemo or radiation during my journey, what was supposed to be a simple thing ended up being complicated and took me down several different paths of soul searching and awareness.  I feel because of that, I can help others even through the parts of the disease I myself didn’t have to face.

My main message to everyone is, not just to rely on your yearly mammograms.  Had I done that, it would have been a year later before my cancer may have been discovered and my situation could have been a lot worse.  Know your body, and listen to it.  You need to be aware when something is wrong and see your doctor as soon as possible.  Early detection is key to fighting this disease.  Check your breasts every month.  Take advantage of all the support groups and cancer organizations that are available. They are there to help you.  Don’t face it alone when there are so many people that want to help you.  Yes we are strong and this journey does make us stronger but we can be stronger together.  I learned that more than anything….we are better together.  Together we can find a cure and fight this disease.

I look forward to my 3 year cancer free anniversary on September 2nd and celebrating it with friends and family.  To me, it is one of the most important days in the year—the celebration of my Life.